A Complete Guide to What Makes a Good Leader 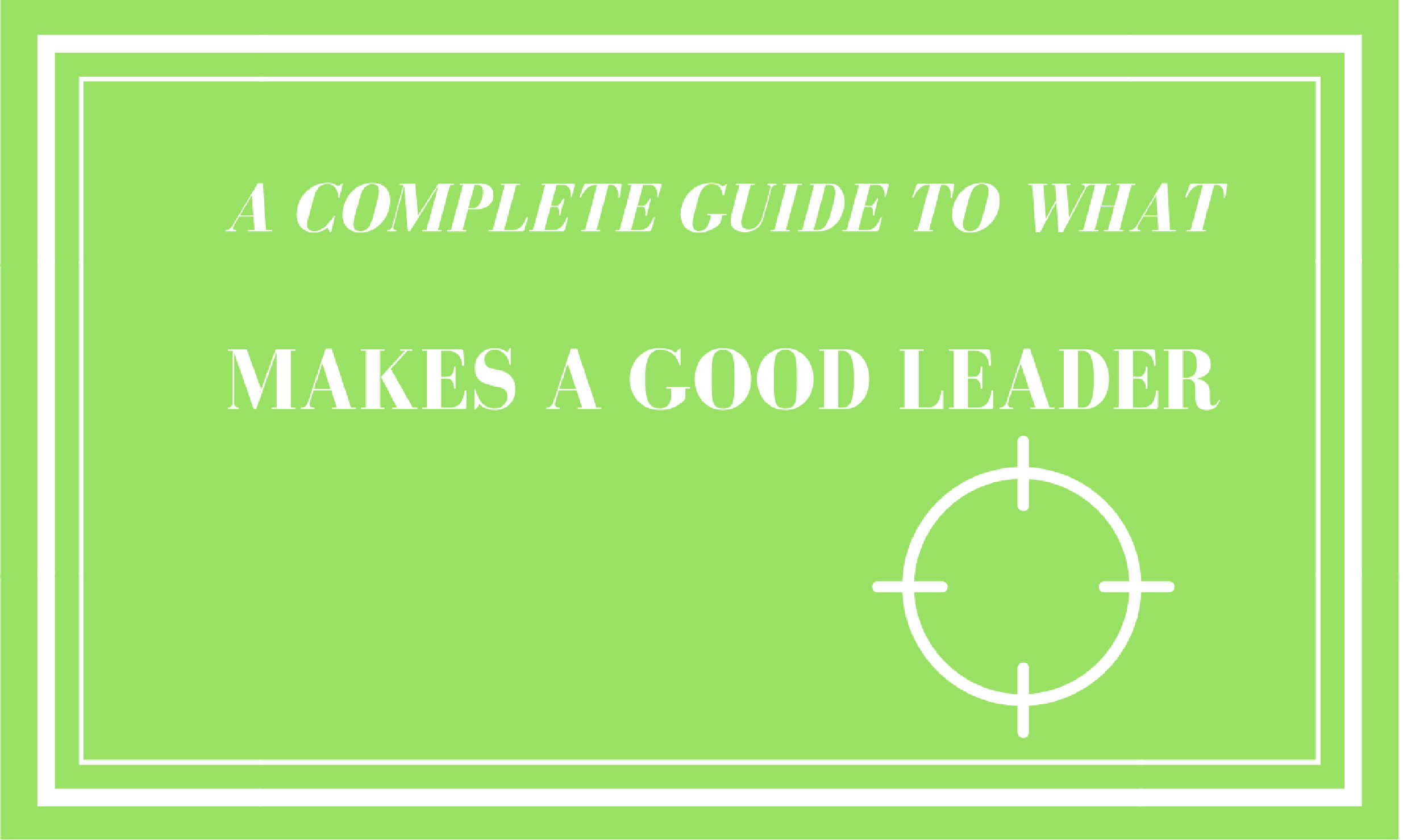 “A person is born a Leader.” We have all heard that saying. It may be true. But good Leaders aren’t born, and neither are they made overnight. It takes a lot of hard work, dedication, and self-discipline on their part to become one. Nonetheless, it is a very tough but rewarding position.

An effective and good leader has the ability to steer his/her team, department or even company towards the right direction. Below are some tips to help you become an effective leader:

Just like a herd of sheep are lost without their Similarly, a team needs the guidance, direction, and advice of their leader. It is important that the leader takes out time to help them, nurture them and guide them towards their career path by offering up suggestions and valuable insights from their past experiences. This helps both the leader/mentor and the team/mentee to learn different perspectives, improve their communication and develop knowledge and skills.

Integrity is one of the most respected qualities in a person. It’s a mark of someone who has strong moral as well as ethical values. A true leader demonstrates integrity by standing up for what they believe in. Showing their team that they are someone who will do exactly what they say and won’t back down from it. That they are someone who will take charge of a project when everyone else is in doubt. Such a leader always attracts people towards them because they are reliable, honest and trustworthy and can always be counted upon to do the right thing even when no one is around.

An effective leader is one who knows that the key to communication is listening. They take into consideration their team’s ideas and suggestions. They make them feel that they are part of a project by listening to them, by giving them the opportunity to pitch their ideas. It is also the right of a leader to dismiss the team’s ideas if they don’t find them suitable but they do so in a respectful manner and keeping into consideration their feelings.

Dwight D. Eisenhower once said: "A sense of humor is part of the art of leadership, of getting along with people, of getting things done." Many think that by keeping a somber composure, they will be taken seriously. But a good leader knows that to lead their team they need to be able to connect with them, make them feel comfortable in their presence, show them that they are approachable. And what better way than with humor. So they aren’t afraid to show their fun side, to joke with their team and have fun with or even lunch with them. At the same time, a good leader knows that they do not have to develop a close personal relationship with the team but rather just be on good terms with them.

Let’s face it, no one follows someone who is fumbling or unsure of themselves or nervous. Fortunately, confidence is something which is innate as well as a skill. One can either be born with it or pick it up along the way. Confident people encourage others (like their peers, audience, customers,) to be confident. A true leader is someone who is self-assured and readily admits he is wrong or does not know the answer to a question. They are willing to take risks to achieve their personal as well as professional goals and have a very positive outlook for their future. Which in turn inspires their team to do the same.

A good leader knows that one should never stop learning. There is new information being released every minute, and one should always be updated. So whenever the opportunity arises, they keep on reading books, taking up courses, and updating themselves with the latest news and happenings from around the world. It might also be a fun group activity to pick out a book, have the team read it and then have them discuss how the company can benefit from the contents of the book.

Being in an important position does get to one’s head. But a good leader keeps himself humble. They accept feedback and criticism from their peers, teammates, and juniors and admit their mistakes when they are wrong. They empathize with their teammates and avoid micromanaging. They stick to their morals and principles, which helps them to remain grounded. Moreover, they do not forget the people and their team who helped them achieve that success.

Many have this mistaken belief that working late at night means that you are working hard. But a great leader knows that it just means that one doesn’t have the ability to not only complete the work on time but also cannot find a balance between work and personal life. They try and find that balance as they know that it proves to be a great help when it comes to their mental and emotional stress. So, they do not sacrifice their personal relationship for the sake of their professional one.

A good leader knows that constructive criticism is a two-way street. They can receive criticism with the same way they give it out: with grace, open mindedness, a positive attitude and in the right spirit. They thrive on negative criticism. They reflect on it and work on it which gives them the opportunity to improve and grow.

Everyone loves to be rewarded for their work especially if they go beyond the call of duty. A good leader knows that they need to show their employees that their hard work and dedication is valued and appreciated which in turn will inspire them to keep on working as hard. Monetary rewards are a good way to show appreciation, but a personal and thoughtful gesture goes a long way.

No one respects a boss who shows favoritism among their employees. This will not only cause hatred and jealousy among the team members and lower their morale, but your peers will see you as someone who is immature and ineffective. A good leader knows that they need to treat their employees fairly and equally. They reward their team based on performance and help/coach those employees who need help/improvement.

Ralph Waldo Emmerson famously quoted: “What you do speaks more loudly than what you say.” If the teams sees that their boss is working with dedication, have strong work ethics and integrity they will be inspired to do the same. Likewise, if they see that their boss is lazy and lacks enthusiasm, they will follow suit. This why a good leader always sets a good example for their employees by remaining truthful, persistent, treating people the way they would like to be treated and never taking anyone for granted.

A proactive leader is engaged and self-motivated. They are the ones who take a “hands-on” approach to everything in their life and career. They have a different mindset when it comes to handling situations. They believe in taking control of their life or situation and turning it around in a way that the outcome is in their favor rather than waiting for things to work out themselves.

Making excuses and not taking responsibility for a project/situation gone wrong is a mark of someone who is immature and unsuccessful in his professional as well as personal life. A good leader knows that they responsible for not only theirs but the actions and outcomes of their teams as well. They know that everybody fails, everybody falls down, and even the best of leaders are not an exception, but they don’t let that faze them out. Instead they get up, dust themselves off, and start again.

Some people tend to believe that tackling a heavy workload all by themselves is a matter of pride and honor. But the overall stress of work does tend to take a toll on one’s health. Especially if you are overloaded with work. A good leader isn’t afraid to delegate his workload to his team. They surround themselves with people they can rely on to get the job done all the while not having to worry about the efficiency and quality of work.

Managing one’s time isn’t always easy. There are last minute meetings, calls, emails, demands, which can be a bit overwhelming. But nonetheless, a good leader knows that with continuous planning, prioritizing, organizing and delegating, the work can get done with ease.

Years ago, the only goal or aim for people was to “make a name for themselves.” And it’s not a bad goal to aspire towards. But it all boils down to respect. You earn respect by showing humility, empathy, and patience to all who crosses your path. A good leader knows that respect is something not demanded but earned. And to earn respect, he also needs to give it out.

Many people have the notion that if there is disorder among the workforce, there is no reason to interfere rather they should let the team handle it themselves. But a good leader knows that they need to stand up and take charge. Not by yelling, shouting and intimidation but rather by encouraging, guiding and helping the team reach its full potential and goals. An effective leader will first discipline them and lead from then on by example.

We have this perception that if someone sounds and looks important, he must be an important Leader. That is far from the truth. Good and effective Leadership is about strengths and resolving difficult obstacles in the most productive and efficient manner. It is a continuous learning process. True leadership comes from guidance, and guidance is given on any level.