How To Manage a Disgruntled Employee 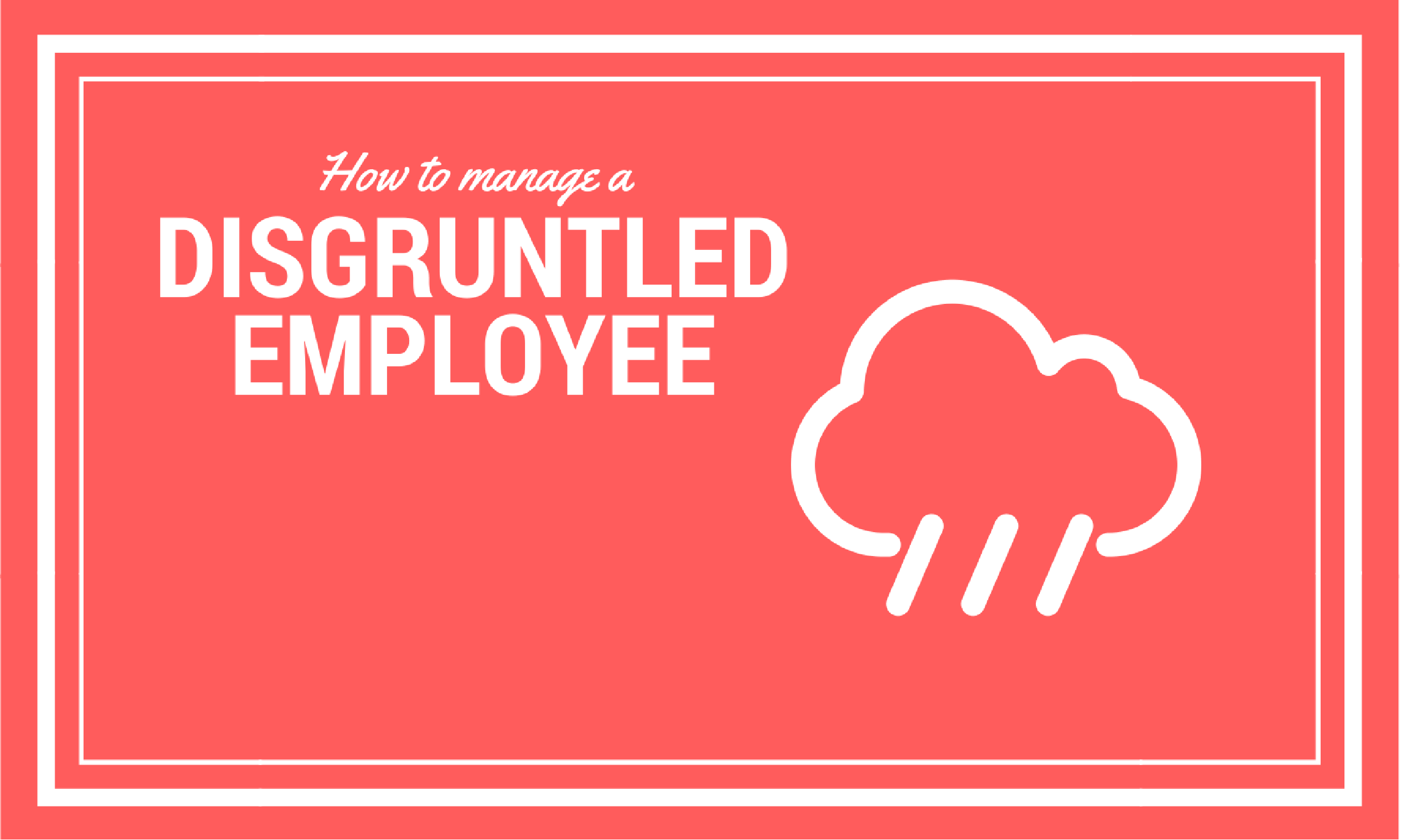 In an ideal world, we’d expect everyone to work and co-exist happily in a place where we spend two-thirds of our day. But in the real world, people are not easy to please, especially if they have to work under the authority of someone else. As a new manager joining a new organization, I was about to experience the nightmare of a disgruntled employee firsthand. At that point in time, I made the mistake of underestimating the toxic power of a disgruntled employee until it struck me in the face with a heated one-on-one session.

It all started with me being hired as a new manager to lead a team of four people, including two who had more than seven years of experience in the same organization and were the much-respected seniors. Here I was, an outsider who coveted the position they both wanted so badly. The first three months of my probation went fine, and I had generally good feedback from the team members. However, as I got the hang of the work and the nature of my team, I began to realize that one of them (let’s call her Miss A) refused to work on my proposed strategies. She would not share feedback or solutions when asked, but she would definitely criticize any new ideas. I convinced myself that all she needed was time and a little space and she’d adjust to my working style. Little did I know that Miss A was not happy with the idea of having a new manager replace her old manager, who also happened to be her best friend that had worked with Miss A for the past seven years. My most senior resource was having attachment issues, and that was something I never expected from a mature, experienced woman.

Fast forward to our second quarterly review with my boss, the department head, and Miss A accused me of things I never fathomed could be possible. I was shocked and completely at lost. It was only then that I realized how wrong I was to neglect and dismiss her negative approach. I learned a few valuable management lessons with this experience, so I’m sharing it here to help you avoid similar circumstances.

I did not schedule weekly one-on-one meetings with the employee in order to understand her issues. I assumed she would be fine if I just gave her new responsibilities and projects to work on, but that was sadly not the case. If I had scheduled weekly one-on-one meetings, I would have been able to get to know her better and alleviate all the pent-up feelings and frustrations. The fundamental lesson I learned here is that as managers, we need to communicate. Disgruntled employees are just like those kids in school who need frequent mentoring and attention to be able to perform well. Listen to what they have to say and tackle each point one at a time. Ignoring their behavior is encouraging it.

Appreciate the Good and Highlight the Negative Less

When we would have our one-on-one meetings, I had a tendency to highlight her negative attributes. I pointed out her uncooperative attitude, her lack of interest in projects, and her needless criticisms. Little did I know that I was doing exactly to her what she was doing to me; we weren’t being very different here. Never make this mistake. Appreciate the good that an employee does and help them to overcome negativity by portraying it as a needs-improvement area. There is a 0% chance your disgruntled employee will accept their negative behavior and apologize. Instead, show them that you’re there to help and not to intimidate them.

Build Trust and a Strong Relationship

Outside the meeting room, try building a relationship. Ask them about their day or their plans for the weekend. Show that you are eager to be a friend, to be someone who can look out for them. Give them advice when needed and have team lunches or gatherings in order to build a strong unit. Disgruntled employees feel less isolated when managers or colleagues make an attempt at unifying the team rather than isolating them. Show your team members that you trust them with their work and that you are not micromanaging them. Empower them and bank on their strengths. When the disgruntled employee realizes that you’ve gained the trust and confidence of everyone else, they will gradually join in, too. At the end of the day, we are all looking for support, and if you are able to give them support, go for it!

Spoken words are the least reliable form of communication. Keep documented versions of meetings, private sessions, and other corporate communications. Avoid giving random and verbal instructions if you can help it. Yes, having face-to-face communication is preferred by most people, but when you deal with a disgruntled employee, documenting things works best. You don’t want to spend hours later defending your rating of their performance (the way I did). At the end of every project, measure their performance and inform them of things they did correctly. Make this a team practice so that it doesn’t seem like you are isolating them.

If your disgruntled employee is like mine, they’re a senior resource with years of experience in the organization, and chances are likely that they have more influence than you do. They can easily influence their colleagues to work against you, and this could lead to a needless power struggle. Avoid all this drama by carrying on with the work as decided. Once everyone agrees on the project plan in the meeting, work should proceed as needed. Do not entertain any new process unless it has been discussed with you and the team in general. When the department or the company carries on work as needed, the employee will understand their disposition. The moment you stall a work process just to satisfy their demands, you empower them.

Understand that the employee is at the edge due to their own insecurities, misconceptions, and fears. It has nothing to do you with you. Do not judge your own capabilities or skills because you have one dissatisfied employee. What matters most is to keep your calm and take on your role as a leader. If the employee misbehaves or uses inappropriate language during a meeting session, stop the meeting and correct them. Do not let them control you by being angry, upset, offensive, or defensive. The more control you have over your emotions, the better you will be at dealing with them. Once the employee realizes that they can’t really intimidate you with their tactics, they will give up.

Understand Their Predicament and Give Them Benefit of Doubt

In the corporate world, we tend to give less thought to what the other person may be going through. Do they have problems at home? Are they experiencing a mental struggle? What’s going on? Try digging into this information and understanding their predicament. Once you are able to detect the reason behind their cynicism, negativity, or anger, you can manage it better. Ideally, they should not let their personal problems cloud their judgement at work, but then, if they knew this, they wouldn’t be a disgruntled employee, right?

Give a Warning as a Last Resort

You shouldn’t be too quick in using your authority. Give the employee a chance and observe if they are willing to improve their weak points. Remember, the focus should be on their productivity more than on their behavior. That being said, of course, you should not tolerate any out-of-line behavior. However, if despite all your effort, they are still reluctant to change their ways, issue a warning. Usually, this is enough to push the employee back. Disgruntled employees are simply out to test the manager’s limits, and when they reach the limit, they know they could be in trouble.

Try to Learn a Lesson from the Employee

If you’re a smart manager, you will attempt to derive a lesson from a disgruntled employee. Somewhere in their disgruntled attitude, there is a point. Try to find that point. In my case, I learned that it was my own lack of communication and my micromanagement in some projects that caused the employee to retaliate more than needed. I was so busy fulfilling my new role as a manager that I forgot to be a leader. It was only after this ugly episode that I realized my flaws and how I should fix them.

Management doesn’t come easy. We need to look beyond our roles and identify the struggles that employees are going through. Granted, we can’t keep everyone satisfied, but we ought to do our best to prevent and control a toxic work environment. At the end of the day, everyone wants peace. Be the one who not only promises but also ensures a healthy working atmosphere for everyone on the team. It will take a huge amount of effort, but eventually, it will pay off.